How To Move Gravel Without a Wheelbarrow – A Simple Method 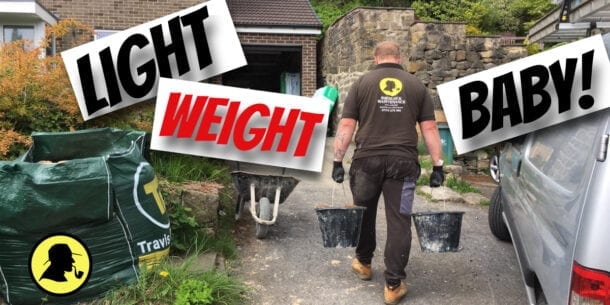 Figuring out how to move gravel without a wheelbarrow can cause you to think of the craziest ideas, when the most straight forward idea is the best idea.

Early this week I had a job to move a bulk bag of gravel from the front of a house to the back of a house, across some scaffold boards, up some concrete steps to where eventually a fake grass area will be laid.

We did try this route with a wheel barrow, which was scarily dangerous and very time consuming.

Ideas started flying about how we could get the stone up to the top the easiest, quickest and the safest way.

We discussed hiring a conveyor belt (very expensive) to building our own pulley crane system (ridiculous).

We were racking our brains thinking how to move gravel without a wheelbarrow.

And that’s when the light bulb hit…What about using two buckets!

In the UK, a standard bucket has a max load carrying weight of 15kg.

That’s a total of 30kg moved at any one a time!

The bulk bags that were delivered to the property each weighed an 850kg.

Crunching the numbers we worked out that it would take 56 buckets to transfer 850kg to the back of the house.

The only problem was how long would it take?

It was near enough 90 feet to the (soon to be) fake grassed area, and we both agreed it would probably take us 5-6 minutes to fill each of our two buckets, walk to the fake grass area, empty the buckets and come back.

Which worked out that each bulk bag would take an one hour and twenty seven minutes (1hr 27mins) to shift.

Put It Into Action

We put the plan into action, filling up both of our two buckets (at the same time) and made our way to the area together (for moral support and a good chin wag,ha).

No rushing, just a steady pace.

Each time we emptied the buckets we made a tally chart on a piece of timber just to see how many buckets it would take.

Moving all the gravel from one bulk bag took a total of one hour and twelve minutes (1hr 12mins).

It was daunting that it would take forever, even when we worked out the numbers.

But to be honest, just over an hour, two men, two buckets each, 850kg of gravel, it’s not a bad job at all.

We also realised using the two bucket method, that each bag was not the 850kg it is advertised at.

I would say at maximum (going by our numbers etc), there was a good 100kg missing.

It was also evident, when we spread the gravel out in the area we had measured, there wasn’t enough.

As we say in England…We’ve been shafted!

Is it worth the argument for the missing gravel? I will leave that with you.

Hopefully using the two bucket method will save you becoming confused on how to move gravel without a wheelbarrow.

If you can, grab a friend to help, and the job will be as quick as ours.

We did have a cuppa half way through…It was hard graft, not going to lie!

If you have any other method, maybe using a plastic snow sledge (that has just come to mind,ha)? Let us know in the comments section below.

Each and every week I put my heart and soul into providing you with great content to help with any DIY jobs around the home.

Mark Holmes (owner of Sherlock Maintenance) is a participant in the Amazon Services LLC Associates Program, an affiliate advertising program designed to provide a means for sites to earn advertising fees by advertising and linking to Amazon.com