When Is It The Best Time To Spray A Wasp Nest? 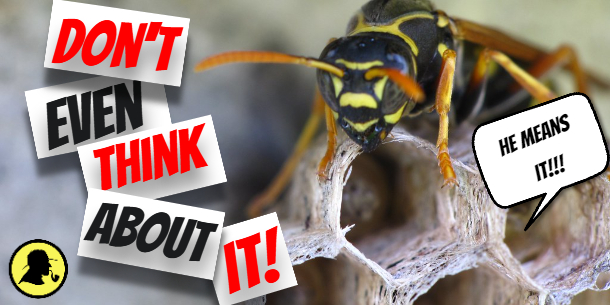 When is it the best time to spray a wasp nest!?

I mean look at it!….It’s straight out of Star Wars, looking like a mini death star!

You’ve only got to look at wasp and it turns into Vinnie Jones…”Oi son, you looking at me!?”

Wasps are too aggressive to be living in your garden or around your house, so the nest has to go, sooner rather than later

So, When Is It The Best Time To Spray A Wasp Nest?

Wasp nest are best to be dealt with at the beginning of spring, at this time it will only be the queen setting up shop.

You need to move fast though, because the number of wasps will increase pretty quick the longer you leave it.

If you have just found this post, and you well into the summer months, make sure you air caution when spraying a wasp nest.

By this time, there will be a considerable amount of wasps, and they are typically more aggressive the later it gets into the summer months.

What Is The Best Time Of Day To Spray a Wasp Nest?

At night or as early as possible in the morning.

If you choose the night, the wasps will be docile and less aggressive.

But don’t use a flashlight because wasps have been know to act aggressively towards a white light, instead use a red light or some red cellophane taped over your torch.

If you feel the dark will be too much of a risk for you, try the morning, but make it as early as possible.

If you leave it too late in the morning, the wasps will become more active as the morning temperature rises, definitely not a good time to act.

Be aware that the nest will have guard wasps keeping a look out for any intruder willing to be brave enough to go near the nest.

Once these guards catch on to what your doing, they will release a guard molecule pheromone to alert the others, be quick with the spray and then run for cover!

Which Is The Best Wasp Nest Removal Spray?

And all three websites selling it (at the time of writing this post) just under £10 is fantastic!

If this product can save you the cost of hiring a pest controller at around the average price of £75 and upwards it’s a worthy investment!

One Zero In Ultra Power wasp nest killer can will provide you with enough to kill 2-3 nests, I personally would use one can per nest just in case.

The best thing about the this wasp spray is that you can stand away from the nest by upto 5 metres, which is fantastic for safety and it give you chance to find cover in your home if the wasps get really rowdy!

How Long To Wait After Spraying Wasp Nest?

I spoke to a few wasp removal companies over the phone, they all agreed if using a shop bought product, 24-48 hours would be best and that two applications would be recommended.

They all also mentioned that you may see some wasps returning within the 24 hours once the nest has been sprayed, and there should be no activity after 48 hours.

When Is It Safe To Remove a Wasp Nest?

Always at least 48 hours after treatment, this will ensure the nest has been penetrated by the insecticide and killed all the wasps, the queen and any returning wasps.

Just make sure you are also certain no wasps are returning before YOU remove the nest.

Then using a bin liner, place it over the nest and then detach the nest into the bin liner, tie it up and throw it away or incinerate it.

Just don’t do what this guy did…

How Long Does a Wasp Nest last If I Leave It Alone?

I don’t blame you if you want to leave it alone, especially if the wasp nest is in a hard to reach area, like your roof eaves.

Typically a wasp nest will last up to four months, starting from the first sign in spring.

But if the nest hasn’t been disturbed by anyone or anything, and its a year the temperatures are looking good, the wasp nest could actually last right up until last month of summer once the temperature begins to fall.

I’ve seen wasps some years darting about through the beginning weeks of October, that’s seven months!

If I had a nest for that long it would drive me insane!

Luckily, if your not brave enough, or some may say stupid enough to take on a wasp colony, then it’s a good job you can hire a wasp removal service to do the dangerous work!

How Much Does It Cost To Remove Wasps?

I scoured the internet and also made some phone calls to find out what the price would be to remove a wasp nest.

I found that some small local companies were not very transparent when it came to pricing.

These small companies (I won’t name, names) wanted to initially come out on a call out charge and then price the job as they go!

Now I like to be fully transparent with MY pricing, and even though a wasp nest can be a massive issue to sort, I wouldn’t like a huge bill to be planted on me, just like that.

I call this “FEAR pricing”, using the FEAR of what if, to force you into parting with your hard earned cash, no questions asked!

So, to make sure you know what your getting for your money, I have put together a table of a few wasp removal companies I spoke to about removing a wasp nest, who were fully transparent.

As you can see the prices vary, although if you can find a company like Edinburgh Wasp Control in your area, who charge a flat fee of £40, I myself would leave it up to them to sort out.

Hopefully, you now know when is it the best time to spray a wasp nest, follow the steps above and you will eradicate your wasp problem in no time.

Again, if your not certain please just go ahead and ring a local wasp removal company, especially if you’ve never been stung before, you won’t know if your allergic to a wasp sting!

If you have already dealt with a wasp nest and have any tips to share with the community, leave a comment and let us know what you did 😉

Each and every week I put my heart and soul into providing you with great content to help with any DIY jobs around the home.

1 thought on “When Is It The Best Time To Spray A Wasp Nest?”

Mark Holmes (owner of Sherlock Maintenance) is a participant in the Amazon Services LLC Associates Program, an affiliate advertising program designed to provide a means for sites to earn advertising fees by advertising and linking to Amazon.com